Today the winners of the Best UK Vet Awards were revealed with Cockburn Veterinary Group based in Coalville, being named the Best Vet in the UK in 2021.

Cockburn Veterinary Group is an independent, family run practice that was established by Bob Cockburn in the 1930s. The practice cares for animals in the Coalville, Ashby-de-la-Zouch, Shepshed, Market Bosworth and Markfield areas and offers their own on-site 24-hour emergency vet service run exclusively in-house.

The annual Best UK Vet awards are in their 9th year and recognise the vet practices delivering the highest levels of service to customers. The awards, organised by VetHelpDirect.com, are based on genuine pet owner reviews of veterinary practices around the United Kingdom. Despite such a challenging year for vets and pet owners, there were 14,299 vet reviews received, an increase of 22% on the previous year – and the highest ever!

Those practices with the most four- and five-star reviews from their customers over the last year are recognised, so, receiving the most positive reviews is a real testament to the team at Cockburn. There are a number of additional categories including: Best Vet in County, Best Start up, Best Mobile, Best Small Animal, Best Referral, Best Scottish, Best Irish and Best Welsh. The Top 25 are also recognised with Gold, Silver and Bronze awarded for the top 3.

"When animal owners are searching for a vet they want a professional, clean, friendly practice that is good value for money, delivers top customer service and that will above all care for their pet or animal. This is why word-of-mouth is so important both for local pet owners and farmers. Authentic online reviews give all animal owners a genuine feel for the practice and help them to find a trusted, local vet more easily. We are proud to be able to reward those that are at the top of their league and receive the most positive reviews."

“It makes me so proud that in this very difficult year, which has been defined by the Covid-19 pandemic, we have had so many positive reviews from our clients. These are a testament to my team’s hard work and dedication to the care and well-being of all our patients.

To receive such overwhelming public support, particularly at a time when so many individuals, families and businesses are struggling is overwhelmingly positive and truly heart-warming and I would like to thank all our lovely clients and  those who took the time to leave us a review. As a small, family owned, independent vets feedback is incredibly important to us and we are grateful for all their reviews.” 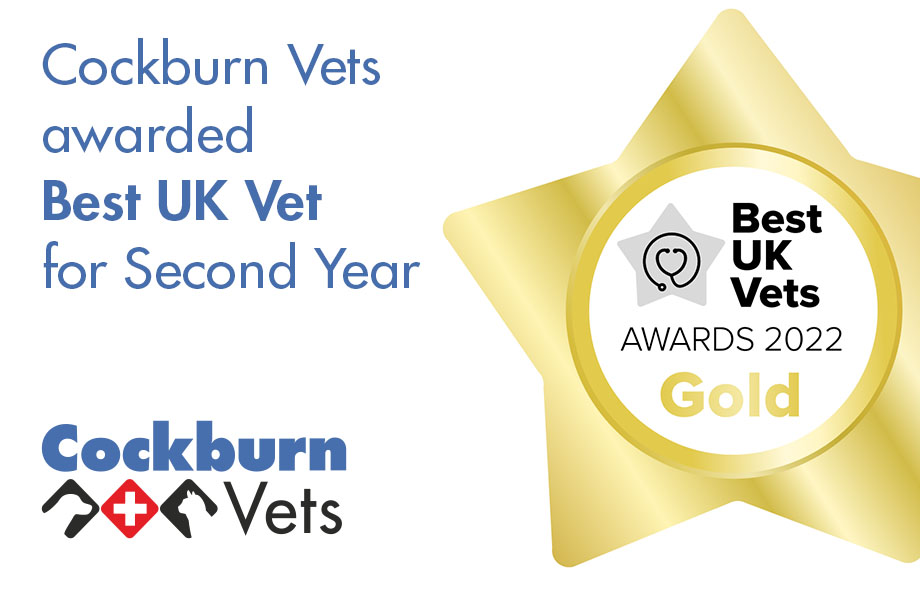 We’re so thrilled to share that Cockburn Vets have been awarded Best UK Vet for the second year running! Thanks to our lovely client reviews,

Good News – we’re looking for a fantastic vet to join our experienced and supportive team! Is that you?